Posted by Jeff Hayes on September 24, 2010 in Business 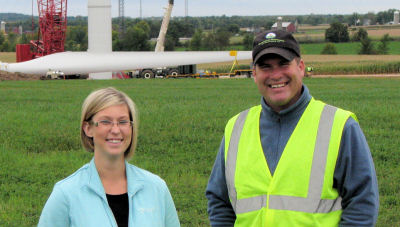 Emerging Energies of Wisconsin recently invited the employees of AlignTech Solutions to visit its latest wind farm in the Town of Shirley, Wisconsin.  And so we went.  Emerging Energies is just now finishing a project in Shirley — a farming community south of Green Bay — to raise eight wind turbines. I love learning new things, so I was really excited to get to see first hand a technology that Europe’s been innovating around for quite a long time.

The Netherlands and Wind Power

Several years ago while visiting Amsterdam and The Haag, I learned that the Dutch have a long and successful history of using wind energy (as well as, apparently, some nifty engineering concepts for keeping the North Sea out of some very New Orleans-like places in The Netherlands).  Some of their oldest windmills appear to be hundreds of years old.  The newest ones — which look just like the ones Emerging Energies is now erecting — dot their beautiful landscapes.

Shirley reminds me of Gordon, Nebraska, and many other small towns in the Midwestern U.S., where the crossroads sports a grain mill and a number of smiling faces.  Residents of Shirley and the surrounding area are about to become the proud neighbors of some impressive-looking wind towers.  So what are these turbines like?

In a nutshell, each wind turbine has the following features:

Staunch wind power opponents have come up with some interesting facts about its production.  And some of these facts should be included in a book entitled “Fairy Tales about Wind Energy”.  Both opponents and proponents of wind energy, however, do agree on the following issues:

Having started my career in the nuclear power industry, where power companies used to use a public relations staff member as their only mouthpiece, I was pleasantly surprised to find that Emerging Energies has developed solid relationships with its neighbors in Shirley. According to Jay Mundinger, one of the founding partners at Emerging Energies, “Education is a big part of what we do.” Jay also said that they work one-on-one with the town and landowners on the placement of the turbines and to help ease the burden of those people who will be inconvenienced during the construction phase. One example of this…  Emerging Energies recently used top soil recovered during construction to fill in some low spots in one of its landowner’s fields.

Thanks to Jay Mundinger, one of the founding partners at Emerging Energies, for giving us the grand tour earlier this week.

Jeff is an agile coach, an agile trainer and a speaker, helping organizations to adopt agile while developing high performing teams. He specializes in scaling scrum to suit the individual enterprise.
View all posts by Jeff Hayes
Follow @"jeff_hayes"
The Social Media of Gaming: Part III – Farmville Saves the World?
Plan to lend a hand for the holidays