Blog / Community / How About a Little Civility?

How About a Little Civility?

Posted by Tim Holdsworth on October 24, 2010 in Community 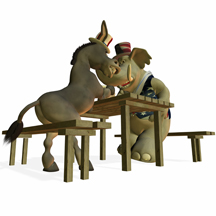 For me, the digital video recorder (DVR) is one of the best inventions – ever.  I get to record and watch programs whenever it’s convenient for me, PLUS, I can skip over all of the commercials.

However, on a recent evening this week I watched “old fashioned” television, which includes commercials. What struck me as I watched was not just the number of commercials, but the wall-to-wall political commercials that exuded cheap-shots, mudslinging and shear vitriol from both political parties.

This started me thinking – what happened to civility in America?

While particularly evident in politics these days, incivility is equally evident when I’m stuck in traffic, when I’m waiting in a long line at the store, watching a children’s sporting event or hearing about the latest media antics.  Take Juan Williams’ recent dismissal from NPR for example. Was it really necessary for Vivian Schiller, president of NPR, to say “Juan Williams should have kept his feelings about Muslims between himself and his psychiatrist.”  She could have avoided a lot of backlash if she had paused and decided to be civil in the situation.

How do we become more civil?

2. a polite action or expression

Civility is ultimately a choice you have to make every day.  You have to choose to honor and respect others in your interactions. You have to exhibit some self-restraint – you don’t have to say everything you’re thinking nor get everything you think you want.  It also requires active listening to others, rather than thinking about what you’re going to say while the other person is talking. Finally, civility means valuing others’ thoughts and respecting them, not ridiculing anyone who does not hold our same position or opinion.

When we’re civil to each other, we’re more likely to share our thoughts and ideas because we don’t fear being verbally harassed. We can work to achieve common solutions through healthy debate and educated compromise.

Ultimately, it’s not that difficult to be civil. We just need to slow down and realize that we can disagree without resorting to name calling and rudeness.  A little bit of civility goes a long way – and it’s high time that we each make the effort on a daily basis.

Remember: “Civility costs nothing and buys everything.”  – Mary Worley Montagu

Tim Holdsworth is a business analyst and marketing specialist for AlignTech Solutions.
View all posts by Tim Holdsworth
Follow @"holdswot"
Plan to lend a hand for the holidays
Managers: The Good and the Bad