Blog / Digital Marketing / The Social Media of Gaming: Part I – Grabbing a Slice

The Social Media of Gaming: Part I – Grabbing a Slice

Posted by Greg Kellerman on June 28, 2010 in Digital Marketing 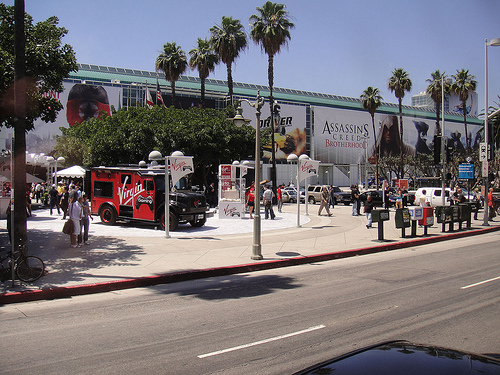 E3 (Electronic Entertainment Expo) is upon us once again and fans of video games worldwide are sneaking a peak in their offices at the countless presentations and articles popping up across the world wide web.  From constantly refreshing gaming sites to get a glimpse at the next big game or covertly viewing the streaming content of press conferences, the land of games is abuzz with what the future holds.

More and more, social media is becoming a huge factor in all walks of media.  From movies to music, social media is a relatively inexpensive way of advertising your product to a massive audience. Quietly, companies are releasing or testing out new social aspects to keep their users online and using their products.

Electronic Arts has tried multiple attempts at social networking applications within their games including EA Sports World and really trying to push Playstation Home with their sports add-ons.

Microsoft has spent a lot of time honing in on what their Xbox Live service can offer including adding Facebook and Twitter.

Playstation Home is Sony’s foray into a gaming social network that has been out in at least beta form since 2008. But, have they really figured out what people want? Electronic Arts announce a new idea called Gun Club this E3 that received a lukewarm response from the audience at their press conference.  Is it the rather odd name they chose or the fact that it seems like a half-hearted attempt at bringing gamers together? Playstation Home has not been what Sony thought it would be.  It’s unbelievably boring and is pretty much a giant billboard of advertisements and trying to squeeze money out of the consumer for frivolous items to add to their virtual home.

Microsoft seems to have forgotten that typing anything of relevance with a controller is a chore.  Why would people use a degraded version of Facebook when they can walk ten feet to their computer and type a message in 1/10th of the time?

There are some rays of sunshine coming through the clouds for socializing with your gaming friends, but they seem to be based on the PC.  Valve’s Steam offers a multitude of social aspects such as instant messaging, voice chat, forums, and groups.

Gamers sometimes want to chat and have a good social time when it is appropriate such as in-game or talking about gaming.  Otherwise, they go to Facebook and visit with their friends.

This is the question I pose to you:  What can gaming companies do to get a piece of that huge social media pie?

In my second part of this series, I will examine how gaming has been able to thrive on social networks such as Facebook. Stay tuned…

Greg Kellerman is a programmer-analyst with AlignTech Solutions and a former game developer.
View all posts by Greg Kellerman
Of Oil Spills and Small Business
The Social Media of Gaming: Part II – Games Within Social Media

Response to “The Social Media of Gaming: Part I – Grabbing a Slice”