Posted by Greg Kellerman on July 29, 2010 in Digital Marketing 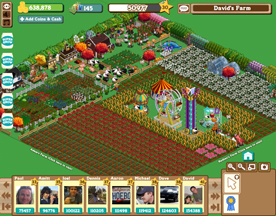 Everyone knows somebody who plays one.  From Farmville to Family Feud, moms, dads, and kids are playing these simple games to pass time, sometimes to relax after work and sometimes even at work.

According to (formerly Appdata.com), which tracks the amount of users on Facebook, nine of the top 15 applications are games. The top app developer, Zynga, is a game company with over 200 million monthly active users.  Think about that for a second.  That is comparable to two-thirds of the population of the United States.  And this isn’t just people who have tried their games, these are active users!

The big question is where does the revenue come from?  As a third-party developer for Facebook, you have to supply your own servers so the cost must be astronomical for a company like Zynga.  Sixty million users of Farmville are eating up bandwidth like a lunch buffet.

The answer will seem foreign to non-game developers, but has been a hot buzz word for quite awhile for game companies: micro-transactions.  Micro-transactions vary from application to application, but in general they focus around a virtual currency that is purchased with real currency and then purchasing items for your game.  This has been used by other game developers for quite awhile.  Xbox Live uses a virtual currency to purchase games, movies, TV shows and extras through Xbox 360.  Most social games use the same idea, but they sell small individual items to boost your abilities or make it easier to play their games.  They sell so well because they seem cheap.

The catch is the majority of items are either consumable or are of limited use.  Consumables usually are a single item which, once used, will disappear.  It might give you a bonus level or make a task easier, but once used it is gone forever.  A limited time item might give you a bonus for a day and then it disappears.  What these companies rely on is the small individual price, usually $1 or $2 and that the person will buy more after the first is used.  The amount is small but can add up quickly.  It’s a brilliant virtual business model that is netting Zynga a rumored $100+ million profit per year.

This is a question I have heard raised and pondered myself: Are they truly video games?  Granted, there are many games on Facebook that strongly fall in the category of “game”. Bejeweled is one that comes to mind, but, something like Farmville?  There is no risk, no winner, no challenge and no ending.  To me, to qualify as a game, you must have at the very least one of these.  Farmville, at best, is a time management simulator.

What does the future hold?

It is rumored that Google is throwing their hat back in the ring of the social media market by investing $100 million into Zynga.  This could be a coup against Facebook to add some healthy competition. Granted, Google has numerous failures so far including Orkut, Google Buzz, and Google Wave.  But with the possibility of exclusivity with Zynga, this might be a game changer.

So far, the reason most “hardcore” gamers have not dived into the social media gaming arena is the simplistic graphics and content.  A few months back, Sid Meier, the maker of the Civilization series of video games, announced that they have thrown their hat in the ring for Facebook games.  Civilization Network is rumored to be a more in-depth Facebook game that is getting a lot of buzz from hardcore gamers.  To be able to grab that demographic will be a huge win.

In closing, social network gaming is still in its infancy and is slowly progressing into a juggernaut of media.  Similar to console gaming and PC gaming, it started small and simple and eventually developed into an industry that surpasses film in sales.  Personally, I’ll be interested when it’s not like playing a work simulator.

Greg Kellerman is a programmer-analyst with AlignTech Solutions and a former game developer.
View all posts by Greg Kellerman
The Social Media of Gaming: Part I – Grabbing a Slice
How’s Your Customer Service?